Among the most fascinating features of apicomplexan biology is their unique cellular architecture. These parasites evolved a highly complex invasion system, consisting of the motility system that is anchored within the Inner Membrane complex (IMC), a Golgi derived organelle of flattened membrane vesicles that are tightly associated with the subpellicular microtubules and the unique secretory organelles (micronemes, rhoptries and dense granules). During the active invasion of the host cell the unique secretory organelles are secreted in a highly coordinated, stepwise process to deploy a whole arsenal of invasion factors. Micronemal organelles are the first to be released and contain virulence factors that act in a sequential manner during host cell egress and (re)invasion. The club shape rhoptries also release important virulence factors, such as ROP16 or 18 that are modulating the response of the host cell.

Finally, after host cell invasion, dense granules are secreted to maintain and modify the parasitophorous vacuole. Importantly, the whole machinery necessary for host cell invasion (including the known gliding machinery) is directly linked to the secretory system of the parasite. Therefore it is necessary to identify and characterise the specific trafficking pathways and sorting steps involved in protein transport to these organelles. Since micronemal proteins act in a highly coordinated stepwise manner during host cell egress and (re-)invasion, we hypothesised that micronemal proteins might be found in different subsets of micronemes. Indeed, using a combination of reverse genetics, high-resolution microscopy and functional assays, we were able to demonstrate that micronemes are representing at least two functionally independent subsets with different protein content.

Our experimental strategy involves cutting edge biochemical, reverse genetic and imaging approaches. We will focus on the systematic analysis of putative endosomal trafficking factors, through image-based analysis and biochemical characterisation (protein-linkage studies). This project is currently funded by an ERC-Starting Grant (consolidator). 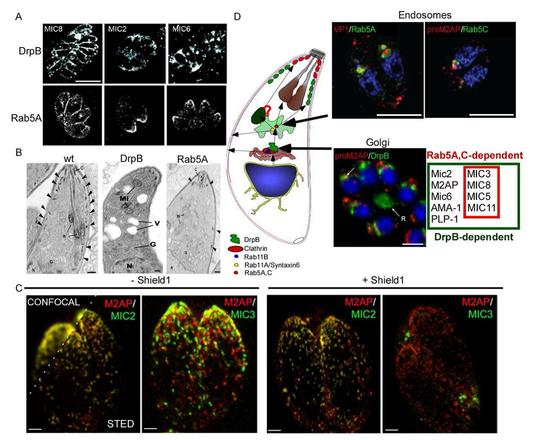