Since high-throughput strategies, based on small interfering RNA cannot be used for the characterisation of GOIs in apicomplexan parasites (Baum et al. 2009), a functional characterisation of essential genes has been difficult. In order to overcome this technical limitation we succeeded in establishing inducible gene regulation systems based on transcriptional or post-transcriptional regulation in these parasites (Meissner et al. 2002; Meissner and Soldati 2005; Herm-Gotz et al. 2007; Agop-Nersesian et al. 2008) that now allow the characterisation of essential factors believed to play a role in critical processes during the asexual cycle of the parasite.

We believe that our efforts in developing and implementing these reverse genetic tools have been instrumental for the functional characterisation of several essential genes, including promising candidates for the development of novel drugs and vaccines against apicomplexan parasites (for a review see (Meissner et al. 2007)). We established a new, powerful technology, based on conditional Cre-recombinase that allows us to analyse essential genes in a medium-throughput approach (Andenmatten et al. 2013). Furthermore we contributed to establish this technology in other apicomplexans, such as P.falciparum (Collins et al. 2013), Leishmania (Duncan et al., 2016) or P.berghei (unpublished). 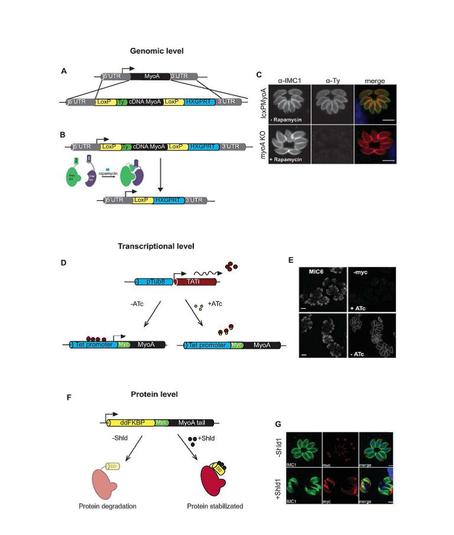 Figure 1. Technologies developed by the Meissner lab: Gene expression can be regulated on multiple levels in Toxoplasma gondii. Manipulation at the genomic level using the DiCre system (A)/(B). Replacement of the endogenous MyoA with a cDNA copy into the loci (A). Upon rapamycin induction, MyoA is irreversibly removed by excision of the MyoA cDNA (C). Transcriptional manipulation using the TET-inducible system where transcription is inhibited by addition of anhydrotetracycline (ATc) preventing transavtivator binding to the promoter region and therefore silencing transcription (D). Myc tagged MyoA expression was shown to be disrupted by IFA (E). Manipulation of protein stability of proteins containing the DD domain allowing overexpression on addition of Shld (F). Myc tagged MyoA degradation shown by IFA (G).